The Art of Rebuilding

I woke up before anybody else did that morning to get gas and go to the grocery store, since there were pretty slim pickings at the house. I wanted to have fruit and veggies in the house on my birthday.

I ended up run/waddling into the restroom at Safeway, since I had apparently left the house “too soon.” Oops!

I was very disappointed to not find a “birthday award” in my Starbucks account. I was looking forward to a free drink, as I had scored one last year on my birthday. Anyone know what the deal is these days or am I missing something?

When I came back home, the baby was already awake. As soon as she saw me, she started making those little sounds of desperation that babies do when they’re hungry and know food is near.

My husband and I had bagels and cream cheese for breakfast together. Then he left for work.

I spent the morning with my 10-year-old cooking and cleaning in preparation for the Noonday Luncheon I had planned for that day. I thought it would be nice way to celebrate – invite others to support jewelry artisans around the world in developing countries. No one came, due to sickness and schedules and other reasons they remained silent about. Well, except for the Noonday ambassador and my mom. It was a small little party. Lots of jewelry to try on! My 10-year-old enjoyed that.

Our pressing financial needs are ever before me, so I was still working from my phone all day, though, in retrospect, I could have been working “smarter.” There’s still so much to learn.

My baby joined us all at the dinner table in her highchair and ate banana for the first time.

My dad spent hours making me the richest, 3-layer chocolate cake known to man, with buttercream filling and a layer of FUDGE for the frosting! We were all barely able to finish our one piece. 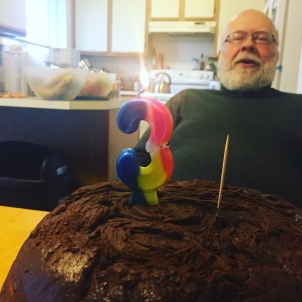 My husband and daughter found a creative way to put “31” on the cake, so I was able to blow out a birthday candle.

After all the eating, we played Scrabble. It’s one of my favorite word games.

The point of this whole thing is to paint a picture. An incomplete picture. A picture of a life that is being rebuilt.

But if I am to let the past be a school that teaches me how to move forward, I would have to say that’s it when you reach the peak of anything, it’s only a matter of time until you have to descend. And this all for the purpose of scaling the next peak.

I’m a sucker for analogies, so here you go:

There are mountain climbers who like to bag peaks in a matter of days. One such trek involved Mount St. Helen, Mount Adams, and Mount Hood – two climbers went up all three peaks over Memorial Day weekend last year. (Read their story here.)

I’ve realized, after 3 decades of life on Planet Earth, this is what life is like. Taiwan was the peak of just one mountain. And when I think about it, there were other smaller mountains I had already scaled before then:

Unexpectedly returning from Taiwan and not getting back on the plane almost three years ago, I found myself at the base of a brand new mountain.

And it took me a while to start climbing. Honestly, I really just wanted to turn around and climb the same mountain again. I missed what it felt like at the top.

But the reality is, the weather on a mountain, even the land and the snow conditions, is always changing. Even I did climb back up to the top, it wouldn’t have been the same.

So here I am. Not even close to the halfway point of scaling another one of life’s mountains. This time, my husband and two daughters are climbing with me.

And I always thought I would only need to build one life for myself.